Household appliances are supposed to make our lives easier. We depend on them to work properly for us, magically keeping our food cold, heating our water, and washing our dishes while we go do other things that we actually want to do. But the ugly truth is that appliances are machines that eventually wear down, malfunction, or just out-and-out break.

Appliances have a nasty habit of breaking when the proper operation of that particular appliance is the most crucial. Refrigerators will break when you've just stocked them with Thanksgiving leftovers. Heating systems blow in the dead of winter. And dishwashers will go kaput just when you've slacked on kitchen duty long enough that the sink is so full of nasty, dirty dishes that washing anything by hand is near impossible. The most appliance-dependent of us will suffer a kind of paralysis until our tools have been returned to proper operation and the status-quo of our daily lives is restored. Want to see this phenomenon in action? Unplug the refrigerator before you head off to work and see how long it takes your spouse to make a frantic call to the refrigerator repairman. Such lapses in appliance functionality are simply intolerable.

Broken appliances suck, but you know what sucks more? Finding a replacement. Even if you're not replacing something that's broken, the process of shopping for a new appliance will quickly ruin any joy you might have otherwise received from the novelty of acquiring it. In the process, you'll juggle your list of "gotta have" features, reliability reports, and price-comparisons until you finally settle on the model that will leave you feeling the least regret.

Appliance shopping is simply brutal, and it's small wonder that at the end of the process many buyers opt to "just have it installed." It's an understandable capitulation. Retailers make a lot of money banking on appliance buyers who aren't willing to tackle the installation. Some people are lucky enough to be able to afford the overpriced installation services. The luckiest see those installations go smoothly. But not for this guy:

Unbridled rage is the only rational response to this situation. Depending on your temperament, and the degree of your DIY nature, this rage will be directed either at the retailer who couldn't get a stupid dishwasher install done right, or it's directed at the homeowner who couldn't be bothered to borrow an electric drill and do it themselves (and then harangue the retailer until they get a refund on the install).

It's OK to want to hire things out. Even for the most avid DIY-er, really, there's times when that's called for if for nothing else than the sake of convenience. But when the system fails us so miserably, do you want to be at the mercy of the installer that takes 14 months, six home visits, and ultimately a call to the local TV news consumer advocate to get it done? Or do you want to unburden yourself from the incompetence of others by Doing It Yourself?
By Todd - June 27, 2013 No comments: 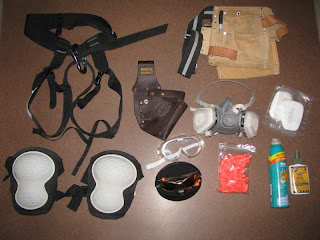 A - Climbing harness for roofing work, tree work, or anywhere there is a reasonable need for caution against falls.
B - Knee pads
C - Tool belt (something I personally rarely use)
D - Drill holster
E - NIOSH-compliant respirator (keep a spare set of filters on hand)
F - Goggles and/or safety shades.
G - Earplugs
H - I always keep a little sunscreen and bug repellent on hand since spring and summer can be intolerable without them.

Email ThisBlogThis!Share to TwitterShare to FacebookShare to Pinterest
Labels: Tools 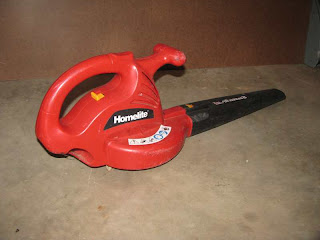 Lightweight electric blower
This thing makes quick work of sweeping away natural and unnatural detritus including grass clippings, leaves, pine needles, sawdust, even light snow.  It's reach is limited by the length of your extension cord, but this is best suited for duties around the house anyway.  This may possibly be the best $25 I've ever spent at Home Depot. 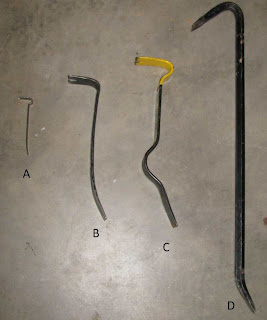 Pry bars / wrecking bars
A - Mini, about 6" long for detail work.
B - Standard pry bar, about 12" long
C - A variation on the standard pry bar; this geometry gives additional leverage for pulling nails on the long end.
D - A 24" wrecking bar which is tailor made for quick & dirty framing demo and applications where maximum leverage is your top priority. 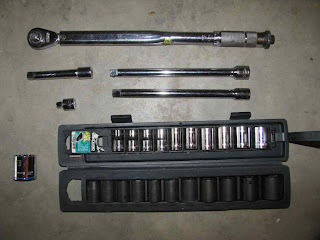 Torque wrench & sockets
A good ratcheting torque wrench is very useful for framing work using carriage bolts, lag screws, and is an absolute necessity for auto maintenance and maintaining lawn tractors and other mechanical equipment.  Look for a minimum 1/2" drive shaft and a maximum torque range over 100 lb-ft.  Drive extensions will allow access to bolt heads buried where there is no room to work the ratchet action.  Start off with a standard kit of Imperial and Metric sockets (3/8" to 15/16" and 13mm-27mm shown).  You'll also pick up specialty sockets on the way, such as a deep-well socket for removing / installing spark plugs, or the 32mm socket pictured at lower left that I picked up specifically to do work on the front axles of my car. 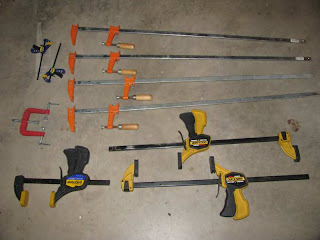 Clamps
Screw-set clamps are best when you need maximum grip force.  Quick clamps (the trigger kind) are a boon to the DIYer, since they're great for a lot of solo projects where you're trying to clamp something one-handed when your other hand is busy holding a workpiece.  Quick clamps work great to clamp something temporarily while you go back and get one of the screw-set clamps to really secure your work.  Some of the quick clamp designs are reversible, converting the lever action from clamping force to spreading force.  A lot of people love the old-fashioned C-clamps but I've gotten by without them.  I forget what I bought the funny red C-clamp (center left) for.  I'm sure I'll find a use for it someday.

Email ThisBlogThis!Share to TwitterShare to FacebookShare to Pinterest
Labels: Tools

Hiring a contractor can be great, but when you do you give up significant control over how the work is done.   You're on their schedule.  Your ability to control costs on raw materials by shopping around different suppliers is limited.

Email ThisBlogThis!Share to TwitterShare to FacebookShare to Pinterest
Labels: WhyDIY

There are few things as disruptive to household bliss as having a long honey-do list.  Whether it's something broken that needs to be fixed or an elective improvement, when something needs to be done it needs to be done pronto - and if you can get it done inexpensively at the same time, that's worth bonus points.  Being able to chip away at a long to-do list of home improvement projects yourself can be a satisfying way to burn a weekend and restore the balance of household peace and tranquility.

Building confidence to take on bigger and more complex tasks is the natural outcome of successful experience as a DIYer.  Start small, and build on the experience for the next time.  Before you know it, you will find yourself questioning the need to hire the pros for projects you never would have remotely considered doing yourself before.

In regards to self-sufficiency, perhaps the best argument for DIY is to free yourself from dependency on sloppy, dishonest, or incompetent contractors, and the companies that hire them.  This isn't to denigrate home improvement contractors in general, and in fact the reputable ones will complain the loudest about the ones who give their business a bad name.  But every service industry has it's shysters, and home improvement is no different.  Some unscrupulous contractors are banking on the naivete of their clients to inflate costs, cut corners, or to otherwise break the rules to maximize their bottom line.  Other home improvement "pros" may not be actively out to screw their customers, but just don't seem to care about getting the job done right. Consider, dear reader, the story of the guy stuck waiting 14 months to get a new dishwasher installed, and tell me he's better off for not sucking it up and finishing the job himself.  If you think he did the right thing, then you are not allowed to read this blog anymore.

Email ThisBlogThis!Share to TwitterShare to FacebookShare to Pinterest
Labels: WhyDIY

DIY involves hard work, no doubt, and it's not for everybody.  But there is a price for convenience.  Service industries exist for the sole purpose of making money.  There is nothing wrong with this, and I salute those individuals that have dedicated themselves to developing the specialized knowledge and skills to make us whole when homeownership throws us a curve ball.  But leveraging experts in any field costs money.

Anyone who has ever owned a house and "had work done" has likely choked when presented with their first quote.  Even seemingly minor visits from qualified repairmen can come with bills that can temporarily evaporate household entertainment budgets.  A $75 bill to have someone show up and stick their head under your sink for 15 minutes can be tough to swallow.  But that bill covers not only the repairman's salary, it pays for the truck (and the gas and the auto insurance) that got them there, the tools of their trade that you didn't have to buy, and the benefit of their experience and the implied assurance that their work will be done on time, on budget, and to professional standards of quality.  It also pays for a broad range of things related to keeping a home improvement business afloat that you, the customer, never have to worry about beyond writing the check.

Where DIY saves you money is in separating you from those "extra" costs; in business terms, the contractor's labor, overhead, and profit.  You still have to pay for raw materials, but you save the markup that most contractors would charge on top of what you would pay yourself if you bought the same materials at the local home improvement store.  Depending on the job, the total savings of DIY can easily cut your out-of-pocket costs by more than half compared to hiring it out.  I've done projects where I've calculated my out-of-pocket savings to be more like 70% to 90%.  On large renovations, a successful DIY job can save you thousands (or tens of thousands) of dollars.

Realizing those kinds of savings, however, is not instantaneous.  Embracing a DIY philosophy involves some up-front investment, though with a fairly rapid rate-of-return.  Once you start, every step is a deposit on making the next project that much easier and cheaper.  You will pick up tools that you can use later.  You will pick up experience that will give you confidence to tackle bigger projects that would have cost even more money to hire out.  And, perhaps most importantly, you will learn what it really takes to get certain home improvement tasks done, which makes you a more knowledgeable consumer when the time comes to shop around for a contractor when you have the flexibility to not DIY.

From the "got to laugh to keep from crying" files... something to add to the list of universal truths along with "water flows...